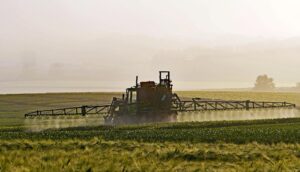 Round Up is a very effective weed killer that has been distributed by the Monsanto company since 1976. Everyone from homeowners, landscapers, gardeners and individuals who performed general yard work, right through to farmers (some of Round Ups heaviest and most frequent users) have used this product to keep weeds at bay.

Unfortunately Round Up appears to not only have been bad for weeds and unwanted plants, but also those individuals who applied Round Up to them as one of the key active ingredients that is found in Round Up (Glyphosate) has been associated with Non Hodgkins Lymphoma cancer.

Glyphosate was developed in 1974 and was key in Round Up’s progress to becoming the worlds number 1 weed killer. Round Up enjoyed a very successful history up until 2015, when the International Agency for Research on Cancer, part of the World Health Organization, announced glyphosate could “probably” cause cancer.

While Bayer, the German chemical and pharmaceutical giant Bayer who acquired Monsanto in 2018 (meaning the Monsanto company effectively no longer exists), insists the product is safe, it has all the same agreed to pay billions that have been awarded to victims in the United States in an effort to put this behind them. (In Canada Miskin Law is currently working on a class action against Bayer who bought Monsanto, the creator of Round Up.

Interestingly, while many countries have banned Round Up, a weaker version is still currently available in Canada.

If there is any good news in this, it would be found in the following two points…